Born In Montreal, Canada 1942, Ron Simpkins began at the young age of seven a dream that would lead him on a path few traveled by professional Canadian landscape artists. Son of Henry Simpkins, late Canadian watercolour specialist, Simpkins understands to be truly liberated and free is to liberate the creative energy within. At the age of 17 his professional painting career took flight.
Attending Ontario College of Art in 1963 drove Simpkins in pursuit of worldwide exploration to further the reaches of his creativity. Widely traveled, as are his paintings which today, can be found in over 500 private and corporate collections throughout Canada, the United-States of America, Europe, Australia and Brazil.
In honor of expo 67 Simpkins painting was selected by the city of Montreal and donated to Herbert Bowden, Secretary of the British Commonwealth as an official gift from Canada. This gifted Canadian artist excels with intense emotion that he pours into his paintings to recreate the serenity of a winter landscape, the translucence of water, the beauty of trees dressed in autumn colours or the brightness of a field bathed in sunlight. Simpkins passion for transmitting beauty is fuelled by the harmony that exists in the natural world that surrounds us.
It was this passion that offered Simpkins great rewards though the 70’s and 80’s as he dazzled the senses of many who attended his solo exhibitions. An important name in the world of Canadian art, it would carry this shy and modest oil painter to great success at his first American Solo Exhibition in Houston Texas 1977. Back home Simpkins was selected the artist of the year by the chartered Banks of Canada, the Quebec chamber of commerce and the Canadian bankers association at the Mercuriades in 1983.
Armed with a palette knife and a curious hunger for capturing light, Simpkins set out to paint his world. His specialty, painting water that looks wet and resonates and ripples with flawless reflections of nature untamed by man. Carefully balancing colors to produce visual waves for the eye in the same manner the ear responds to sound waves, this en plein air painter meditates as he fills the canvas with clear and uplifting images of beauty.
“What I try to create is the energy and vibrations of light as nature as my guide to give people a feeling as uplifting as light itself. To me light is god whoever or whatever that may be.”
Ron Simpkins as a post impressionist painter of the 21st century would confront many challenges on his quest for the truth.

Simpkins has overcome an era of restrictions and definitions as he paints with a new freedom. In a smooth and sweeping transition Simpkins art has evolved. The father of “ Essentialism” a unique and powerful style all his own. Like the great masters before him Monet, Cézanne and Davincci, Simpkins has broken away from conventional methods opening a new milieu for sharing creativity. His paintings reveal the magnificence of the essential elements of nature; air, water and light. Simpkins Paints the essential elements with skilfully flavoured vibrancy and awakening colours that uplift and liberate the soul mirroring the creative energy of an artist who is celebrating a mystery unveiled after decades of perseverance. 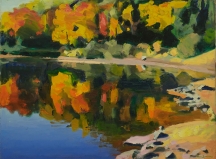