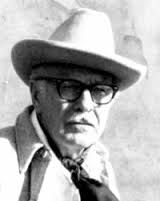 He was born and raised on a farm in Massey, Ontario, Canada. He became an illustrator for mail-order catalogues and for the Toronto Star, but studied in his spare time at the Ontario College of Art and then at the École des Beaux-Arts de Montréal. He went to New York City at the age of twenty-five as the pupil of Frank Vincent DuMond and Dean Cornwell at the Art Students League. However he continued to work as an illustrator for over 30 years and his work appeared in magazines such as National Geographic and Reader's Digest. Lougheed's work as a commercial artist included the Mobil Oil logo of the red flying horse.

He explored the American West, particularly the old Bell Ranch, NM and many of his paintings were inspired by the scenery and animals of the region. Consequently, in 1970, he was commissioned by the United States Post Office Department to design the six-cent buffalo stamp for their Wildlife Conservation Series.

Lougheed illustrated children's books such as the horse novels Mustang and San Domingo by Marguerite Henry and The Bell Ranch As I Knew It by George F. Ellis. He also illustrated books by Martha Downer Ellis, about the Bell Ranch, NM including Bell Ranch Sketches, Bell Ranch People and Places and Bell Ranch Recollections. He won multiple awards at both the National Academy of Western Art and the Cowboy Artists of America. Some of his work is in the Cowboy Hall of Fame in Oklahoma City, Oklahoma.

Robert Lougheed's interest in art extended to founding of the National Academy of Art at the National Cowboy Hall of Fame. He continued to serve as an advisor to the academy for many years. He also worked voluntarily as a teacher to many young painters.

In December 2007 the Lougheed Studo at Claggett/Rey Gallery opened in Vail, Colorado. The Studio is devoted to the life and legacy of Robert Lougheed. www.robertlougheed.com In January 2010 A book was released called Robert Lougheed Follow the Sun. It Chronicles the life and career of this prolific artist.

Lougheed was born in Ontario, Canada in 1910. He received his art education at the Ontario College of Art and at Ecole des Beaux Arts in Montreal and was known to have studied under DuMond and Cornwell.

The artist worked as an illustrator for the Toronto Star, National Geographic, and Reader's Digest. He designed Mobil's "flying red horse" logo and was commissioned by the US Post Office to design the six cent buffalo stamp for the Wildlife Conservation Series. He helped to form the National Academy of Western Art at the Phoenix Art Museum in Arizona. He also taught and mentored many of today's finest wilderness artists.

Lougheed was awarded the Western Heritage Award in 1966 and gold medals for painting by the National Cowboy Hall of Fame in 1969 and 1972.

​His work can presently be viewed at the Cowboy Hall of Fame. Robert Lougheed was an easel painter and always painted as well as taught his pupils to paint directly from nature. He died in Santa Fe, New Mexico in 1982. 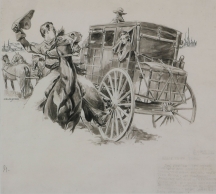 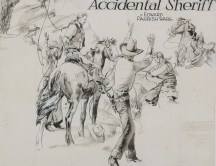