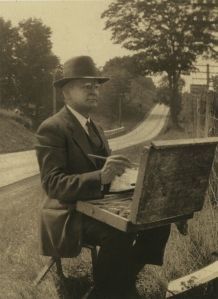 By the time Robert Emmett Owen came to Boston in 1898, he was already an accomplished artist contributing pen and ink drawings to Life Magazine. Owen enrolled in the Eric Pape School of Art in that same year and after three years of study in Boston he moved to New York City, where he worked as an illustrator for Cosmopolitan, Harper’s and Scribner’s. In New York, he continued his training at the Art Students League, the Chase School and the National Academy of Design, and also studied with impressionist painters Frederick Mulhaupt and Leonard Ochtman.  By 1910, Owen had left New York and moved to Bagnall, Connecticut to paint from nature.  In 1915, he exhibited with and was elected a member of the Connecticut Academy of Fine Arts. 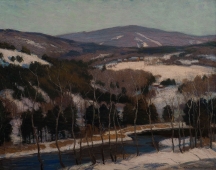