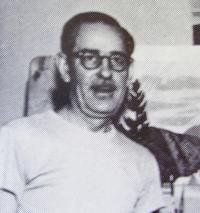 Albert Edward Cloutier was born in 1902 of Canadian parents in Leominster, Massachusetts, USA. The family moved back to Canada 1903. As a child he was encouraged to paint by his parents. He was mostly self-taught. He went on painting trips with A. Y. Jackson and Edwin Holgate. Cloutier was an apprentice with Smeaton Bros in Montreal in 1918–21. He worked with Associated Engravers in Montreal (1922–25) and with Batten Ltd. in Montreal (1926–29). From 1929 to 1940 he was a freelance graphic designer and illustrator in Montreal.[1] He was part of the "Oxford Group" led by the painters André Biéler and Edwin Holgate, which met in a below-ground room at the Oxford tavern at lunchtime. The group had roughly equal numbers of francophone and anglophone members. Other members were Adrien Hébert, the art critic Jean Chauvin and the editor Carrier.

Cloutier and Edwin Holgate made a mural for the Canadian pavilion at the 1939 New York World's Fair, commissioned by the Canadian government. It showed a panorama of the country in terms of industries, people and products. The focus of the mural was a hydroelectric dam with a white horse in front of it, representing power. Transmission lines lead from the dam to pulp and paper, mining and manufacturing industries. A man with a horse and plough in the foreground represented traditional agriculture. During World War II (1939–1945) Cloutier was Art Director for the Wartime Information Board in 1941. In 1941 Cloutier and Eric Aldwinckle made a poster of Canada's New Army. The work follows the current style with clean lines and a simple, efficient design. Cloutier was an official war artist with the Royal Canadian Air Force from 1943 to 1946. He was the only francophone war artist. His pictures included training aircraft and flying boats.

Cloutier made silkscreens for Sampson Matthews Limited. He was a freelance graphic designer and illustrator in Ottawa (1946–48) and then back in Montreal from 1948 onward. He lectured at the École des beaux-arts de Montréal for more than two years. Cloutier was among the artists selected to decorate the interior of the Queen Elizabeth Hotel, owned by the Canadian National Railway, which opened in 1958. Others were Jean Dallaire (wall hanging), Marius Plamondon (stained glass mural), Claude Vermette (ceramic tiles) and Julien Hébert (bronze elevator doors). Cloutier contributed carved wooden panels. He painted a mural for the main dining room of the Salle Bonaventure in the hotel.

Cloutier worked in oils, water colors, tempera, clay, wood and metals. His paintings mainly depict the beauty of Canadian landscapes. His early paintings showed the influence of the French Impressionists, the Group of Seven and Paul Cézanne. His later work was an intensified realism, with increasingly abstract and plastic forms. Cloutier followed the French Canadian tradition of showing settled farm landscapes and avoided modernism. Selected commissions include:

450 square feet (42 m2) frieze in collaboration with Edwin Holgate for the Canadian pavilion at the 1939 New York World's Fair
Mural for one of the new Park cars on the Canadian Pacific Railway's Canadian passenger train
Twelve panels for the Salle Bonaventure in the Queen Elizabeth Hotel, Montreal
Mural for Le Carignan restaurant at Place Ville Marie in Montreal
Painting of soldiers from the Carignan-Salières Regiment in full battle-dress in dyes on fabric
Cloutier made some of the illustrations for Kingdom of the Saguenay (1936) by Marius Barbeau. He designed and illustrated Pathway to Greatness (1959) for the Canadian Pulp & Paper Association. The book described how the Saint Lawrence River was developed into the Saint Lawrence Seaway. 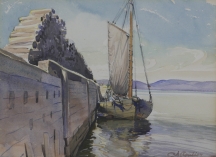