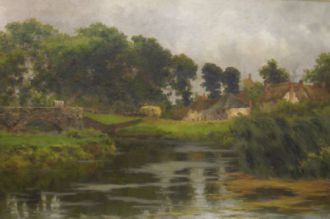 Born in Englefield Green, Surrey, England, the son of Rev. John G. Manly a Methodist minister, he came to Canada at an early age with his parents. His father served in various places in Canada, Jamaica, England and Ireland and finally settled in Toronto where he died in 1908. During those years Charles Manly studied at Heatherley's School, London, the Metropolitan School of Art, Dublin, Ireland (1881-1884). On his return to Canada he settled in Toronto where he became active in the Toronto Art Students' League as a founding member (1886). It was in the League Calendar issued from 1893 to 1904 that Manly's superb pen-and-ink drawings and water colours appeared. He was active as well with the Ontario Society of Artists (O.S.A. 1876) and the Royal Canadian Academy (A.R.C.A. 1890) and became President of the O.S.A. in 1903.