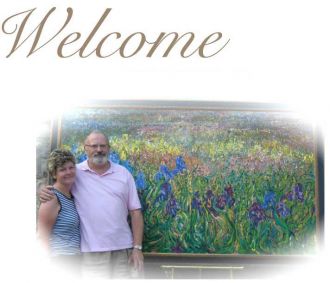 Born in Moncton, New Brunswick the only son of an RCAF pilot. When the war ended the family moved to Toronto where his father began a career in printing and lithography. In 1954 his father built him a studio and taught him how to use oil paints. In 1961, at the age of 17 he won the CNE mural competition. He decided to attend OCA with the intention of becoming a professional painter.

By then he was working part-time for several Toronto companies illustrating their catalogues. At school he painted under the guidance of his art teacher Alex Fraser of Gordon Graydon Secondary School. Summers were spent landscape painting at his uncle's Gatineau cottage. A misplaced application to the OCA in 1963 led to his enrollment in the anatomy and human dissection courses at the Canadian Memorial Chiropractic College which resulted in a ten year career as a medical illustrator, during which time he also graduated as a doctor of chiropractic (1967). In 1975 he became a certified clinical specialist. For the next decade he maintained a studio in New York City, where he painted a series of abstract expressionist canvases and immersed himself in the Manhattan art milieu.

In 1986 he returned to Toronto and established a studio and gallery in Cabbagetown. Working in oils, he studied impressionistic techniques-greatly influenced by the work of Claude Monet. He makes frequent trips to Normandy with his wife Barbara Vance. In Canada, Drum continues to record the Quebec-Ontario landscape. He is represented in private and corporate collections across Canada and recent commissions include works for the film industry. He is listed in North American Art Sales Auction Indices and the dictionary of Canadian Artists. He resides in Crystal Beach.