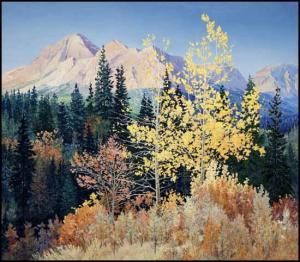 Born in Calgary, Alberta in 1938. Flodberg studied at the Alberta College of Art under Illingworth Kerr before spending ten years on the West Coast as a seaman. He returned to the prairies to graduate from A.C.A. He worked as an art director for a local firm before returning to the College as a curator of its gallery. Later he taught commercial art at the College.

Gilbert Flodberg has devoted much of his life to the intense observation of the colours and textures of the landscape of southern Alberta. By creating a grandeur and more romantic vision of the landscape that surrounds us all, Gilbert presents images that are at once familiar, but in a way not usually seen in our hurried contact with nature. Whether he is engaged in a vista foothills narrative or a detailed study of a single tree, Gilbert continually works through a sensibility that has been strongly shaped by his conviction that the foothills are best captured through texture and the illusion of immense space. Through this intensified approach, Gilbert is able to communicate an unusual sense of grandeur without sacrificing a certain intimacy and approachability. Not satisfied with a single system of colour or locale, Gilbert’s paintings are far ranging in their content and mood, yet are still uniquely Southern Alberta. 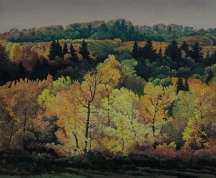