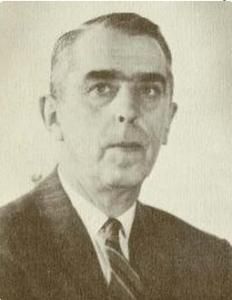 Doug Lawley was born in Glace Bay, Nova Scotia. Graduating from Mount Allison University and then McGill in Montreal. He taught for many years and specialized in Latin. Ultimately he became principal of Westmount High School. After his retirement one of his former students who had become a teacher at Montreal’s Lower Canada College convinced Lawley to resume teaching at the school, that is Lower Canada College.

As early as 1937 Lawley had considered becoming an artist but teaching won out as his primary occupation. He pursued his interest in painting as a student of Agnes Lefort in Montreal and Albro Hibbard of the American National Academy.

Although we know of a body of harbor scenes with fishing boats painted in Nova Scotia, the most significant, exciting and original of his oeuvre is that which includes Lawley’s keen interest in horses. While home in Montreal he painted delightful scenes on Mount Royal, often featuring the horse-drawn caleches touring about. Sketching in the Charlevoix area, Lawley found teams of horses being used to log the area. In due course while back in his native N.S., Lawley heard of Sable Island, an island off the coast where, according to legend, there existed some wild ponies which had been abandoned there in the 16th century after an attempt to settle the island. Even in Lawley’s day, before oil companies took an interest in the area, Sable Island was still a sanctuary for the ponies with access controlled by the Federal Department of Fisheries. Lawley visited Sable Island a few times and found there his most important subject matter, these magnificent Sable Island ponies which, over the years, had developed very thick hides to protect them from the fierce wind and storms of the area. Paintings of these ponies were featured in Lawley’s first one-man show held at the Dominion Gallery in 1962. Since that time interest and enthusiasm for paintings by Lawley has grown enormously, particularly in the province of Quebec and through the Maritimes.

Doug Lawley’s paintings are represented in numerous private and corporate collections throughout Canada. 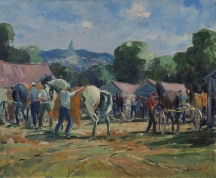