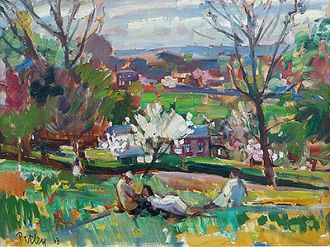 Born in Edmonton in 1908, Llewellyn began learning his craft from magazines, books and other sources and quickly showed a gift for painting and drawing. After working as a bank clerk for three years, he turned to painting. In 1927 he became a member of the Edmonton Art Club and in 1931 one of the original members of the Alberta Society of Artists. A selection of his paintings were accepted that same year at an annual juried show at the National Gallery of Canada.

Establishing a studio in Edmonton, where he also taught art to support himself, Llewellyn Petley-Jones became known for his portraits, oils and watercolours of the Edmonton and West coast area. In 1934 he moved to London where he established a temporary residence. The following year one of his watercolours of Seba Beach, Alberta was accepted by the Royal Academy directors for their annual show in London.

In the same year he was accepted to exhibit by the Royal Society of British Artists. He then set up a studio in the Montparnasse section of Paris and his “Autumn on the Seine” was exhibited in the Societe Nationale des Beaux-Arts. His success continued with pictures being accepted by the Salon d’Automne.

In 1939 he met and married Nancy Corbet in London, who was visiting from her home town in Calgary at that time. They went to Italy but had to flee the country a few hours before Mussolini declared war. All his Italian paintings were lost when they made their hasty departure. In London he held his first one-man show at Matthiesen Limited on Bond Street and The Rt. Hon. R.B. Bennett opened the exhibition. Petley-Jones served in the British navy during World War II.

In 1950, fifteen years of his work was shown at the Museum of Arts in Edmonton. Shows were also held at Eaton’s College Street store, Toronto, and at the Contemporary Canadian Artists show at the Art Gallery of Toronto and the Western Art Circuit.
In 1954 he was commissioned by the C.P.R. to paint murals for the interior of one of their railcars. The murals were taken out of the railcars and are now in the collection at the Canadian Science and Technology Museum.

He then with his wife and six children traveled to Paris, France, stopping first in London to exhibit his British Columbia paintings then at Richmond near London then finally Paris to do a series of paintings (between one and two hundred) for Dr. Max Stern of the Dominion Gallery, Montreal. He returned to England and settled with his family at Richmond where he established a studio.

In 1955 he was commissioned by the Alberta Government to paint portraits of Queen Elizabeth and the Duke of Edinburgh for the Alberta Legislative Building. Petley-Jones exhibited in numerous solo and group shows in Canada and Europe.