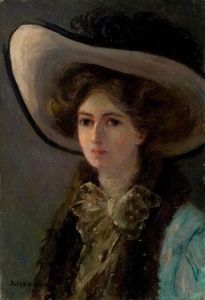 IN 1946 NORFOLK banker Goldsborough Serpell bequeathed to the Museum an extraordinary gift of paintings,oil studies, academic drawings, and
sketches by his wife, the artist Susan Watkins (1875-1913). Among the most important gifts made to the Museum prior to Walter P. Chrysler Jr.'s arrival in 1971, the Serpell bequest comprises 62 works of art by Watkins, as well as photographs, scrapbooks, and other memorabilia documenting her career. The donation constitutes a veritable life's work, a rich artistic archive through which the Chrysler can tell the fascinating story of Watkins' career. Her work took her from her native California to the Art Students League in New York City and then in 1896 to Paris, where, during the next 14 years, she established herself as an award-winning painter. Returning to New York in 1910, she was elected an associate member of the National Academy of Design, confirming her reputation as an American artist on the rise. Her health, however, had already begun to fail her, and in 1913, only a year after her marriage to Serpell and a move to Norfolk, Watkins died. She was 37 years old. (right: Susan Watkins Serpell (1875-1913), Lady in Yellow (Eleanor Reeves), ca. 1905, oil on canvas, Collection of Chrysler Museum of Art, 46.76.137. Photo: Scott Wolff)

Drawn exclusively from the Museum's Permanent Collection, Gentle Modernist traces Watkins' career from her student days in Paris to her triumphant return to America. In so doing, it sheds new light on the fundamental changes sweeping the art establishment in the decades around 1900, when gifted women artists such as Mary Cassatt, Cecilia Beaux, and Watkins herself could at last fulfill their promise and, in a discipline long dominated by men, forge distinguished careers as professional painters.

Following is wall text from the exhibition provided by the Museum:

At his death in 1946, Goldsborough Serpell of Norfolk bequeathed to the Museum an extraordinary gift of paintings, oil studies, academic drawings, and sketches by his wife, the artist Susan Watkins. Among the most important gifts made to the Museum prior to the arrival of Waiter P. Chrysler, Jr.'s collection in 1971, the Serpell bequest comprises 62 works of art by Watkins, as well as photographs, scrapbooks, and other memorabilia documenting her career. The donation, which serves as the source for this exhibition, constitutes a veritable life's work, a rich artistic archive through which the Chrysler can tell the fascinating story of Watkins' exceptional, and tragically brief, career.

Born in California in 1875, Watkins began her artistic training at age 15 at the Art Students League in New York, where her father, James T. Watkins, had moved the family to work as an editorialist for the New York Sun. The League was then America's most prestigious art school, and Watkins, encouraged by her wealthy, well-connected parents, pursued her studies there for six years. In 1896, shortly after her father's death, Watkins and her mother, Susan Ella Owens Watkins, departed for Paris, the epicenter of the Western art world. Though Paris was home to the revolutionary art of the Impressionists and a host of other avant-garde aesthetic movements, Watkins chose to follow a more traditional path and continued her studies with the painter Raphael Collin, a conservative master who provided the young American with a solid grounding in the French academic style.

Her education completed, by 1899 Watkins had established herself as an independent artist in the French capital and submitted her first paintings to the Salon, the all-important exhibition of contemporary art held annually in Paris. One of those paintings was awarded an Honorable Mention. Over the next decade she exhibited regularly at the Salon and at major venues back in the United States, including the Art Institute of Chicago and the Corcoran Art Gallery in Washington, D.C., garnering a series of increasingly prestigious awards. By 1910, the year she left Paris and returned to New York, she had built an international reputation as a distinguished portraitist and gifted painter of landscapes and elegant genre scenes of upper-class life.
In America the accolades continued. In 1910 Watkins won the highly-coveted Julia A. Shaw Memorial Prize at the National Academy of Design in New York, and two years later she was made an associate member of the Academy, a clear endorsement of her achievement and her continued promise as a painter on the threshold of artistic maturity. Sadly, that promise remained unfulfilled. By 1912, Watkins had fallen ill, mostly likely from cancer. Her health failing, she married longtime suitor Goldsborough Serpell and moved with him to Norfolk. In June 1913, Susan Watkins died. She was 37 years old.

Though cut short, Watkins' career saw her confirmed as a master painter both in Europe and the United States, an exceptional accomplishment for any young artist. Her career also serves to illuminate the fundamental changes sweeping the art establishment in the decades around 1900, when gifted women artists such as Mary Cassatt, Cecilia Beaux, and Susan Watkins could at last fulfill their promise and, in a discipline long dominated by men, forge distinguished careers as professional painters.

By ZACHARY REID | Richmond Times-Dispatch
If not for two things, the name Susan Watkins might mean something to more than a handful of patrons at a Norfolk museum. But a peculiar combination of family money and an early death intervened, and Watkins fell into obscurity at just the moment she seemed poised for the fame she had ambitiously pursued.
An accomplished painter who’d studied under well-regarded teachers in New York and Paris, Watkins had mastered her talent by the early 20th century when women were finally beginning to find acceptance as artists.
A little younger than Mary Cassatt and a little older than Georgia O’Keeffe, Watkins was every bit their equal at similar stages of artistic development. She had an especially stunning style with portraiture. Art patron and collector Gertrude Vanderbilt Whitney, who would later create her own museum, acquired a Watkins.
A century later, though, when the works of Cassatt and O’Keeffe regularly sell for millions of dollars, only a handful of finished paintings by Watkins are known to exist, and most are in a single collection.
“Life got in the way,” said Crawford Alexander Mann III, the curator of American art at Norfolk’s Chrysler Museum of Art, which has the paintings, as well as a collection of Watkins’ smaller works and sketchbooks. “She didn’t live to see (the fame).”
Watkins took ill while living in Europe, then quickly married a suitor she’d long spurned and moved with him back to the U.S. in 1910. They settled in his hometown of Norfolk. About three years later, she died, likely of cancer, at age 37.
Her chance at widespread fame died then, too, because so little of her work had been distributed, and what she’d saved herself wound up in the possession of her relatively new husband, Norfolk banker Goldsborough Serpell.
Serpell proved a good, if guarded, custodian of the work. He kept it stored safely until his death, in 1946, when it was bequeathed to what is now the Chrysler.
Watkins was hardly a familiar name to casual collectors before her death.
For her dogged pursuit of acceptance in the male-dominated world of professional painters — she regularly submitted pieces to the most prestigious salons and shows in Europe and the U.S. — she was never overly ambitious in selling her work.
As a woman of some means, she didn’t need the money.
“She wasn’t selling her work,” Mann said. “She wasn’t trying. She didn’t need to support herself. She was doing it for accolades and reputation.”
Watkins was born into wealth in 1875, the daughter of a California newspaper editor and the granddaughter of a trans-Pacific ship captain. She grew up in San Francisco and New York, then moved to Paris with her mother in the late 1890s after her father died. At every step, she studied art, a pursuit in which she became known for her talent, not her money.
“Her work shows a firm command,” said Mark Lewis, the painting conservator at the Chrysler who has become intimately familiar with Watkins’ paintings as he has worked to preserve them.
She learned her command under two people. In New York, she, like O’Keeffe a few years later, studied under William Merritt Chase at the Art Students League. In Paris, she studied with Raphael Collin, an academically inclined instructor who offered Watkins a formal alternative to the impressionist movement.
The solid grounding paid off.
She won an honorable mention in her first major show, the 1899 Salon in Paris, the city’s annual show of contemporary art.
In the 1900 Salon, her painting “The 1830 Girl” won a third-class gold medal.
“American artists, and women in particular, rarely took high honors at the Salons,” Joyce Szabo, an art history professor at the University of New Mexico, wrote in a 1999 issue of Women’s Art Journal. “Thus ‘1830 Girl’ immediately established Susan Watkins’ reputation both in Paris and at home.”
The Chrysler has two of her pieces on permanent display.
A portrait of her sister Eleanor, titled “Lady in Yellow” (1902), is in one gallery, a few feet from a Cassatt.
A life-size portrait of an unknown model, titled “Marguerite,” is in an adjoining gallery. It’s noted for its size — few women at the time painted full-length, life-size portraits — and for the technical expertise required to finish a piece with so many shades of white.
“She was definitely challenging herself,” Mann said.
Across the galley from “Marguerite” (c. 1906) is a life-size portrait of Watkins herself, painted by Chase the year after she died.
“She’s looking at her own work,” Mann said as he stood in the galley.
The museum has at least two other gallery-quality pieces, “The Necklace” (1902) and “The 1830 Girl” (1900). Though neither is on display, Mann said both are candidates for public display in the museum’s ever-shifting displays.
The collection also includes “Boys Picking Grapes at Capri” (1906), which shows nude peasant boys in a vineyard. It’s not a polished work, Mann said, but it is notable for its subject matter: At the time, women didn’t often paint nudes outdoors. Watkins did the work on a trip to Italy, where the practice was more accepted than it would have been in the U.S.
In storage, the museum has several other portraits, a dozen or more small plein air pieces of notable scenes in Paris, two studies later used to create “Boys Picking Grapes at Capri” and several sketchbooks.
Mann pulled out several sketches that were framed for a past show.
“They’re beautiful,” he said. “But for her, it was just practice.”
The practice never paid off, and Watkins fell into obscurity not long after she died.
But she didn’t disappear completely.
“There are a number of women painters from that era we should know about but don’t,” Mann said. “We’re lucky to be able to tell this very complete story.”